The americans Wiki
Register
Don't have an account?
Sign In
Advertisement
in: Season Two, Episodes, Images of A Little Night Music

"My soul is fine Oleg Igorevich. How is yours?" ― Nina

A Little Night Music is the fourth episode of Season Two of The Americans on FX, and the seventeenth episode overall.

When turning Anton Baklanov is deemed unlikely, the Jennings are assigned to exfiltrate him by force. Claudia tells the Jennings that Andrew Larrick is her primary suspect in the Connors' murders. Elizabeth gets his file by seducing a naval recruit. Fallout from Vlad's death affects Agent Gaad's job. Paige's new friend Kelli takes her to a church function. 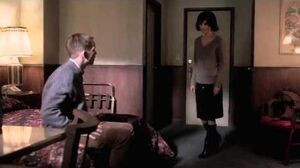