The americans Wiki
Register
Don't have an account?
Sign In
Advertisement
in: Episodes, Season Three, Images of Baggage

Baggage is the second episode of Season Three of The Americans on FX, and the twenty-eighth episode overall.

Elizabeth and Philip come together to deal with a mission gone wrong but struggle to reconcile their increasingly opposing ideologies. Stan welcomes a Soviet defector to America. Nina acclimates to her new living arrangements. 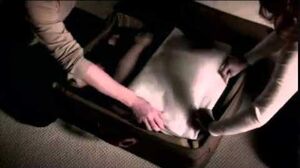