The americans Wiki
Register
Don't have an account?
Sign In
Advertisement
in: Season Four, Episodes, Images of Clarks Place

"I can't live like this Clark. I need to be able to just reach my husband." ― Martha

Clark's Place is the fifth episode of Season Four of The Americans on FX, and the forty-fourth episode overall.

Philip must consider his life with Martha and make a crushing choice from which there is no coming back. 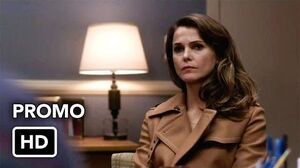