The americans Wiki
Register
Don't have an account?
Sign In
Advertisement
in: Females, Characters, Season 3 Characters,
and 2 more

Katja Herbers
Evi Sneijder is a Belgian citizen who was in the USSR on a student visa. When she is caught making a dead drop, she finds herself in a Soviet prison. She claims she is innocent and did nothing wrong. In reality, Evi's boyfriend was a spy, and she willingly made the drop for him. He fled the USSR a week before her capture.

Evi's prison cellmate is Nina, who tricks her into confessing to her crime. It is unclear what becomes of Evi after this; she is last shown being dragged, screaming, from her cell. It is likely she was executed. 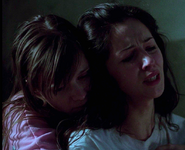