The americans Wiki
Register
Don't have an account?
Sign In
Advertisement
in: Season Four, Season Premiere, Episodes, Images of Glanders

"I said I would do anything I could to protect you, to keep you safe." ― Clark to Martha

Glanders is the season premiere of Season Four of The Americans on FX, and the fortieth episode overall.

Elizabeth and Philip are supposed to get a biological weapon sample but fail to make the exchange when someone is watching. Nina works Anton in hopes it will lead to her freedom. Paige wonders if she can trust Pastor Tim with her secret. 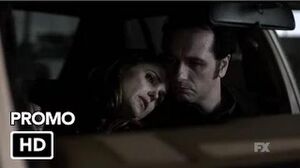