Marina Squerciati
Irina Fyodorovna Semenova (Russian: Ирина Фёдоровна Семёновна) is an ex-Directorate S agent stationed in Canada under the identity of "Anne" from Montreal. She is the ex-girlfriend of Philip Jennings back when they both lived in the USSR. She became pregnant before Philip/Mischa entered the KGB academy and kept this information from him until they reunited years later for a mission to discredit a charismatic Polish dissident on his trip to the United States. After drugging the dissident and making it appear that he raped her, she sleeps with Philip and confesses that she's become disillusioned with the KGB and plans to flee. She asks him to defect with her, but he refuses ("Duty and Honor")

Irina was ultimately caught and arrested sometime after, but not before leaving a bundle of foreign money and passports with her father to give to her son, Mischa. ("Persona Non Grata") 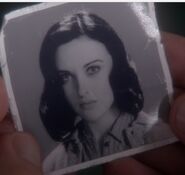