The americans Wiki
Register
Don't have an account?
Sign In
Advertisement
in: Characters, Females, Americans,
and 6 more

Julia Garner
Kimberly Breland is a recurring character on the FX series, The Americans. She is the daughter of CIA Afghan group head Isaac Breland and the unsuspecting asset of KGB agent Philip Jennings as "James".

Kimberly ("Kimmy") was born in 1967. With her father and stepmother mostly absent due to their jobs and her older siblings moved out, she became a lonely girl living in a big house. Although she regularly hung out and smoked weed with her friends, she considered them superficial.

For a long time, she believed that her father worked for the US Department of Agriculture, and was oblivious to the fact that he is in the CIA. Phillip, in one of his guises, befriended her in order to plant a recording device in her father's briefcase.

She also babysat for Ted Paaswell, a colleague of her father's.

After high school, Kimmy attends college in Michigan, but continues to maintain contact with Philip. She tells him of plans she and her friends have to spend Thanksgiving in Greece. In spite of Elizabeth prompting him to convince her to go to Bulgaria, where the KGB planned to drug and hold her for ransom to bribe her father, Philip decided to break off contact with Kimberly for her own safety. 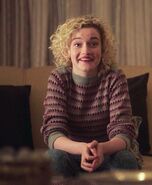 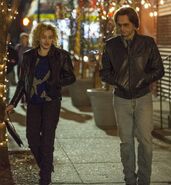