The americans Wiki
Register
Don't have an account?
Sign In
Advertisement
in: Season Two, Episodes, Images of New Car

"Buying a car is about feel. How does it make you feel?" ― Rich Perkins

New Car is the eighth episode of Season Two of The Americans on FX, and the twenty-first episode overall.

Philip and Elizabeth both find themselves faced with painful turns in their various missions. Stan fights to gain access to an American military program that could give him the upper hand in his battle of wills with Oleg. 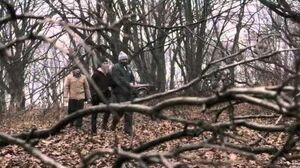