The americans Wiki
Register
Don't have an account?
Sign In
Advertisement
in: Episodes, Season Six, Series Finale, Images of START

"I would have done anything for you Philip. For any of you." ― Stan

START is the tenth episode of the final season of The Americans on FX, and the seventy-fifth episode overall.  It serves as the show's series finale.

The Jennings face a choice that will change their lives forever. 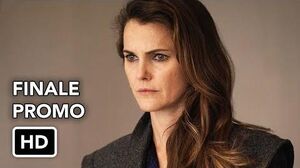