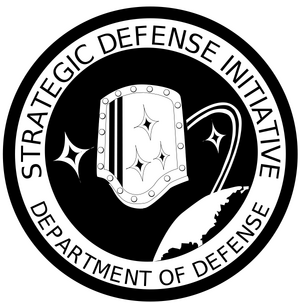 The Strategic Defense Initiative (SDI), also called "Star Wars," was a proposed US anti-ballistic missile program. It was supposed to use ground-based and space-based systems to protect the United States from a nuclear attack.

The concept was first announced publicly by President Ronald Reagan in 1983. In 1984, the Strategic Defense Initiative Organization (SDIO) was created in the US Department of Defense. A wide array of advanced weapon concepts, including lasers, particle beam weapons and space-based missile systems were studied.

In 1981, Colonel Rennhull told Philip that the program was impossible. ("The Colonel") In 1987, the American Physical Society concluded that the technologies being considered were decades away from being ready for use, and at least another decade of research was required to know whether such a system was even possible. After the publication of the APS report, SDI's budget was repeatedly cut.

SDI was controversial throughout its brief history, and mockingly nicknamed "Star Wars," after the popular 1977 film by George Lucas. By the early 1990s, with the Cold War ending and nuclear arsenals being rapidly reduced, political support for SDI collapsed. SDI officially ended in 1993.