The Committee on Human Rights

"It was worse than you could imagine. People were shot, worked to death in the camps. Some were counterrevolutionaries. But some, some hadn't done anything." ―Gabriel

The Committee on Human Rights is the seventh episode of Season Five of The Americans on FX, and the fifty-ninth episode overall.

As Paige becomes even more enmeshed in her parents' world, tensions with Matthew Beeman come to a head. Philip and Elizabeth's honeytraps take surprising turns, and Stan faces the consequences of overplaying his hand at the FBI. 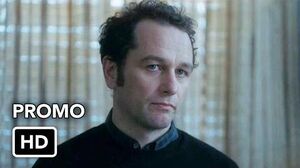 Retrieved from "https://theamericans.fandom.com/wiki/The_Committee_on_Human_Rights?oldid=25739"
Community content is available under CC-BY-SA unless otherwise noted.