The americans Wiki
Register
Don't have an account?
Sign In
Advertisement
in: Episodes, Season Five, Images of The Midges

"When I was 14, they drag my father out of our apartment in night, no talking, no explaining. Six months later, letter come, tell us he's in camp...he die 15 years later. They never let us see him. That is the Soviet Union I know." ― Alexei Morozov

The Midges is the third episode of Season Five of The Americans on FX, and the fifty-fifth episode overall.

Philip and Elizabeth tell Paige more about the family business, but pressing new questions arise when an operation takes a ghastly and unexpected turn. Meanwhile, a sensitive package jeopardizes Oleg's life back home. 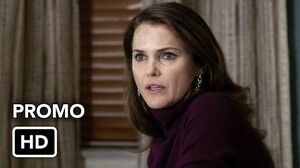