The americans Wiki
Register
Don't have an account?
Sign In
Advertisement
in: Season One, Episodes, Images of The Oath

"You can kill me or you can let me redeem myself in the eyes of our beloved Russia." ― Nina to Arkady

An Air Force colonel offers to sell SDI secrets to the KGB. Viola reports the bug in the Weinberger home. "Clark" agrees to marry Martha hoping she'll continue spying while Nina confesses to spying for the Americans. 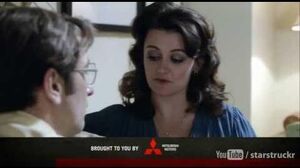