"I was putting our country first. Which is what you would have done." ― Philip to Elizabeth

The Summit is the eighth episode of the final season of The Americans on FX, and the seventy-third episode overall.

With the arms control summit under way, a shocking revelation from Philip throws Elizabeth, and her work, into turmoil. Stan follows a dangerous hunch. 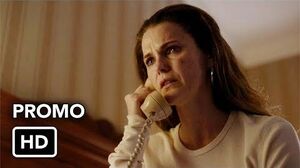 Retrieved from "https://theamericans.fandom.com/wiki/The_Summit?oldid=25764"
Community content is available under CC-BY-SA unless otherwise noted.