"We've been talking about whether it's time for us to end our tour here." ― Elizabeth to Claudia

The World Council of Churches is the twelfth episode of Season Five of The Americans on FX, and the sixty-fourth episode overall.

As Philip and Elizabeth grapple with a momentous decision, Tuan takes matters into his own hands in the Morozov operation. Back in Russia, Oleg's investigation collides with the realities of the Soviet system. 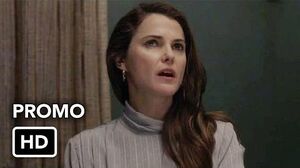 Retrieved from "https://theamericans.fandom.com/wiki/The_World_Council_of_Churches?oldid=24928"
Community content is available under CC-BY-SA unless otherwise noted.