The americans Wiki
Register
Don't have an account?
Sign In
in: Characters, Season 5 Characters, Males,
and 5 more

Ivan Mok
Tuan Eckert is a high-school aged Vietnamese-American boy who works for a Vietnamese intelligence agency. His agency partnered with the Soviets for a joint mission. Tuan posed as the adopted son of "Brad" and Dee Eckert (Philip and Elizabeth Jennings in disguise), living in the same neighborhood as the newly-arrived Soviet defector Alexei Morozov and his family. The two families become friends.

Alexei is happy in the US but his wife and son Pasha are miserable. Tuan instructs Pasha how to fake a suicide attempt, in order to convince his parents to return home. Whether intentionally or by accident, this goes horribly wrong: Pascha nearly dies and is hospitalized, and the Jenningses' cover may have been blown in the process.

Tuan tells Philip that his entire family was killed during the Vietnam War. He escaped death only because he was away from his village with his grandmother when it was attacked. He can remember eating garbage off the street and is highly critical of Americans, especially teens and children, whom he considers spoiled and soft.

When Tuan first came to the US, he lived with a family in Seattle who treated him well, but, according to Tuan, were exceedingly proud of themselves for having taken in a "boat person." Tuan's unauthorized attempts to contact an ill younger child in his former family causes a rift between him and the Jenningses.

In August 1984, Tuan criticizes the Jenningses for not being present enough throughout the mission (failing to consider that they ran multiple missions simultaneously). He also reprimanded them for placing concern for Pasha's life over the success of the mission. Elizabeth encourages Tuan to have "his people" send him a partner; she says without one he is destined to fail. 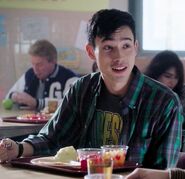