Tonye Patano
Viola Johnson is a maid for U.S. Secretary of Defense. She lives in the historical Anacostia neighborhood of Washington, DC, and has a son, Grayson, who attends a local university. She also has a brother, Albert. Viola is a woman of faith with a strong belief in God.

She was coerced by a disguised Philip and Elizabeth to help the KGB by placing a bug in Weinberger's office. ("The Clock") She later confessed to Mrs. Weinberger and told the FBI everything she knew. This resulted in FBI sketches of Philip and Elizabeth, albeit in disguise with Elizabeth's being compared to a sketch provided from a description by Richard Patterson. ("The Oath") 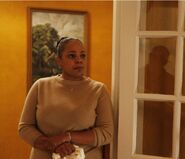 Add a photo to this gallery
Retrieved from "https://theamericans.fandom.com/wiki/Viola_Johnson?oldid=24784"
Community content is available under CC-BY-SA unless otherwise noted.