"I did what I had to do to survive. You do what you need to do." ―Yelena Burova to Oleg

What's the Matter with Kansas? is the fourth episode of Season Five of The Americans on FX, and the fifty-sixth episode overall.

Philip and Elizabeth have qualms about a new assignment, while a specter from Philip's past creates unforeseen dangers. At the FBI, Stan makes a shocking play that could throw his career into turmoil. 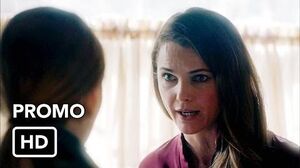 Retrieved from "https://theamericans.fandom.com/wiki/What%27s_the_Matter_with_Kansas%3F?oldid=24921"
Community content is available under CC-BY-SA unless otherwise noted.